So, I missed a week. Again. Honestly, I don't know if I've held a decently consistent enough posting schedule to count absence as "missing." But regardless, this time I have something that resides in the same neighborhood as an excuse: I was in Vegas. Now, I could have just scheduled some posts to go up while I was gone but, I didn't. Because I was 1) tired, 2) packing, and 3) lazy. Mostly lazy.

So, yeah, I spent a week in Vegas, gambled, shopped, and became the official Nerd Queen. How, you ask? Well, apparently, my long genetic history of Midwesterners and Southerners means that I am simply not bred for dry weather. I had an awesome time,  but by day four I had to buy nasal spray.

By day five, my husband was so worried by/sick of the horrible noises I made whenever I tried to do something frivolous like breathe, that he had hotel send up a humidifier. I spent an entire day reading and gradually taking our hotel room's humidity up to rainforest levels. It was a good day.

But, despite my Urkel-like levels of nerdy nasal distress, I loved Vegas. Did you know that they have cocktail waitresses there? And that if you sit at a penny slot machine long enough, one will come by and offer you a drink? And that they will bring you any drink you want, and all you have to do is tip? Because that is a thing in Vegas casinos. That is an actual thing.

Anyway, I'm back in the Midwest where I (apparently) belong, and back to blogging. See you in a couple of days.

Do me a favor and watch this:

Now help me understand. So, Summer's Eve had those hands-as-vaginas commercials which were basically universally put down as being anything from ridiculous to insulting. I know because I checked. I typed "Colbert Vagina" into my YouTube search field.

So this is their new plan? Seriously? The whole concept is basically "your lady-bits are really important, because men think so - they'd LITERALLY kill for it. Summer's Eve: keep your baby-hole clean."

Labels: overthinking it, too much?, videos

Do you ever wonder if fish find having their tank cleaned extremely traumatizing?

Because the process seems to go swimming/can't breathe/where am I?/can't breathe/swimming. Which seems like it'd be a bit much for your average angel fish to deal with.


This is where a segue would go if I had one... New Doctor Who this weekend, and there are so many questions to answer! Will the Doctor find Amy's baby? What's up with that chick with the eyepatch? Will my husband accept that were going to have three daughters that I'll name Sarah Jane, Romana, and Amelia and that's just going to be real for him?


Have a great weekend and, if you live on the East coast, make sure your hatches are duly battened!

Oh, and you've seen this video, right? Even if you have, watch it again.

There's no stopping her

I missed a posting day. But I'm already back so, when compared with my last scheduling failure (where I missed approximately 72 posting days), that's not really that bad. And this time I have a legitimate excuse - I'm rocking some serious overtime at work for the next couple of weeks. So if these next these next few entries aren't up to my usual standard of thoughtful and intelligent rhetorical deconstruction paired with sparkling, Dorothy Parker-like, wit, please forgive me.*


Moving right along, September is clearly going to be Tyra Month. In addition to the impending release of literary game-changer Modelland, next month brings us a new season of ANTM. More than that, it's an all-star season. Which basically makes no sense, because some of these women are now north of thirty. And it's not that I find thirty particularly old in any real world sense, it's just that this isn't the real world - it's modelling.

For the high-fashion stuff that Tyra seems to be leaning toward, 18 is a little old, and 24 is impossibly ancient. At thirty, I don't really know what there is, aside from catalog work (which Tyra talks about as if it were on par with modelling for escort service ads), so what's the prize? I mean, if it's just a crap-ton of money then awesome - enjoy the flaming shark tank catwalk that Tyra has probably constructed. But if it's another contract - who would it be with? Activia? Even the regular series' Cover Girl ads get minimal airplay (because, as my friend put it- what's going to sell more product: Some girl that a few people watched on a reality show for a few weeks, or an actual celebrity?), so if it's just another contract with them, how much support do you think a 29-year-old neophyte is going to get? Would a couple of commercials that will barely air really be worth a month plus in a house stacked with 50-70% Designated Cycle Bitches?

Which, of course, isn't to say that I won't watch. The season premiere airs the day after the release of Modelland, and Tyra is Tyra. She's made contestants recreate her old pictures, live in Tyra-themed apartments, and perform in her music video. I have to believe in a world where this season includes at least one Modelland-themed challenge. And when Tyra sends those girls through a military obstacle course wearing thigh-high boots with 8-inch stiletto heels - all while telling thing that they shouldn't complain because it's TOTALLY like that time she had to walk a runway in Milan in platforms that were too small - I want to be there.


*A "does this just happen" to me question: do you ever worry that, when you're being self-effacing, people just think you have a severely inflated self-image?
Posted by Bee at 11:17 AM No comments:

Can we talk about Anthropologie, for a second?

Like any good broke but aspirational twenty-something, I have an Anthropologie rewards/frequent shopper card. I like to imagine that there will be a time when I'm wandering my elegantly ecclectic home, swathed in a gauzy floral dress, serving basil duck (in this fantasy, I can make Thai food) on whimsical dinnerware.

In reality, I think I've used my Anthro Card twice.


But, still, having it means that I'm entitled to...a birthday freebie! You know, like an email or a postcard with a coupon!
Or... 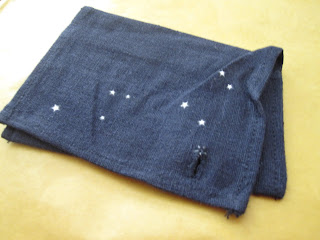 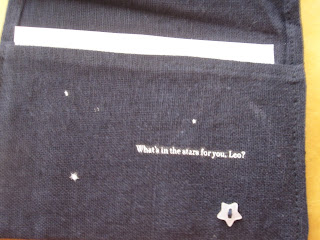 I guess you could send a 15% off coupon in a linen pouch with a teensy little star button. If you wanted to be all...Anthro about it.

I got linked! Just like the cool kids do!

A while back, I made a banner for my husband's birthday. I've been meaning to post about it for the better part of a month, but I keep stalling/procrastinating.

Then, yesterday, it got posted on Epbot (!!) with a link to my blog (Hi, Epbot Readers!), so I figured it was about time that I actually posted about it here. Though first, for those who aren't familiar with Epbot, it's the geeky and crafty blog run the same person who writes Cakewrecks. Both of her blogs are fantastic, and I highly reccommend them.

Back to the banner. My husband's birthday was last month, and we threw a party. Though by party, I really mean that we had about ten people over to drink and watch The Happening (which is a movie so ridiculous, that one of our guests seemed downright offended by it). I made a bunch food, I made honeydew vodka (which was crazy easy to do), and I made this: 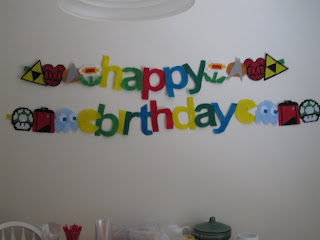 Thanks to the many craft and decorating blogs I read, I've been wanting an excuse to make bunting. But, since we don't have parties (being around large groups of people requires a three-week psyche-up on my part) there was never really any reason...until now! But it occurred to me that a whimsical mix of yellow and white printed fabric triangles affixed to a coral-colored ribbon wasn't really up my husband's alley, so I suggested this instead.

It's specially designed to suit my husband's personal geek-loves. It was, unfortunately, not specifically designed to actually hang on the wall. Apparently, I seriously overestimated the strength/stiffness of two layers of felt held together by craft glue and invisible thread. To get it to stay up like this we had to use strategically placed sewing pins.

Though this is something that I would have to majorly re-think before trying again, I do like how it turned out. Particularly the 1-up Mushroom: 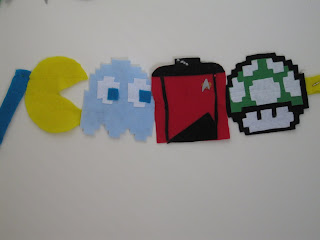 And the Radiohead logo, which I put in as a surprise because:
1 - my husband loves Radiohead, and
2 - I didn't want to tell him about it until I was sure that I could make it. As you can see, it has a lot of pieces 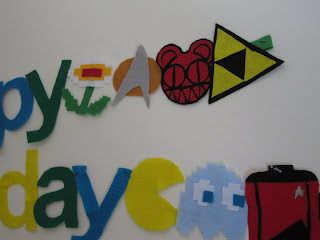 So, overall, it was a success! So much so that my husband left it up over our breakfast table (which would more accurately be called our "mail & empty serving platter table") for the entire month. And the party itself was a success, too!

Except for the cake. I'm going to be real with you - I'm pretty good with cookies, but cakes are not my strong suit. And by "not my strong suit" I mean that the cake was like a chocolate-frosted brick.

But there were cookies (sugar cookie cups filled with lemon curd. Just sayin'), plus guacamole and booze. So I'm still calling it a win.

Labels: cooking, Good news everyone, I make stuff, like a winner, links, nerdy

If it's good enough for Tim Gunn

As of this weekend, I've started watching HGTV. I've been living in apartments for three years now, and decorating is still not a thing that's really happened for. At all.

Well, unless you count the cheap-o DVD shelves that I painted (rather poorly) on a whim a couple of summers ago.

But now: HGTV! Because I'm hoping that watching hours upon hours of home buying/renovating/decorating is the source of people's decorating knowledge and capability, rather than a symptom of some innate, untouchable, stylishness.

I just don't want to be that person whose whole house could be described as "A Study in Beige." Nor do I want to be the person who has a giant statue of a tiger - formed entirely out of stained glass and mirrors - serving as the base of her coffee table.

(Actually, it'd be kind of fun to be that person. How cool would it be to be some crazy, aging society dame with a fur turban, a ton of brooches, a gin habit, and maybe some sort of long-suffering personal assistant?)

So, anyway, I'm watching HGTV in the hopes that by the time I have a home, and some money, and a scroll saw (I should never own a scroll saw), I'll be full of clever decorating ideas.

As of day two, the only idea I've had is this: HGTV totally needs scripted programming.

It could be about unreasonably young and sexy home inspectors looking at each other melodramatically while assessing basement water damage. And one of them could have a fraught relationship with a corrupt realtor who forces them to falsify inspections so that her sellers get good prices.

Season 1 could end with the delicate and naive (but damaged) lead female character inspecting a house that has been booby trapped with tons of mold! Oh no! "Will she survive?" you'll wonder, as the season closes with a close-up of her panicked (but carefully made-up) face.

But then, you know, of course she will. Because she's only been in there for a few minutes, and it's mold, for God's sake, not arsenic.

Bee
I write things, watch things and make things. You can email me at andthenrobots@gmail.com